The has been in space for less than a year, but it’s already racked up an impressive list of firsts, from capturing the to the first-ever detection of what may be . Now, Webb is making history again by collecting a full chemical profile from the atmosphere of a distant exoplanet. The new data, published by multiple international teams across five studies (,,,,), makes WASP-39 b possibly the best-studied planet outside our solar system.

WASP-39 b orbits a sun-like star about 700 light years away from Earth, but it orbits it extremely closely. The exoplanet, which is roughly the size of Saturn, is eight times closer to its star than Mercury is to ours.

The exoplanet was originally discovered using transit photometry, which analyzes small dips in light for evidence that an exoplanet has passed in front of a star. This method is the most effective we have for identifying exoplanets, but it only works if the orbital plane passes in front of the star from our perspective.

By the same token, Webb can watch for WASP-39 b to transit the star to gather data from its atmosphere. As WASP-39 batters the planet with radiation, some of that energy is absorbed by molecules in the gas giant’s atmosphere. Thus, it’s possible to get data on the chemical processes at work, and there are a few notable things going on. For example, WASP-39 b is now the first exoplanet known to have sulfur dioxide in its air. This production of this molecule is powered by high-energy light from the star, and given its location, WASP-39 b has plenty of that. This is the . 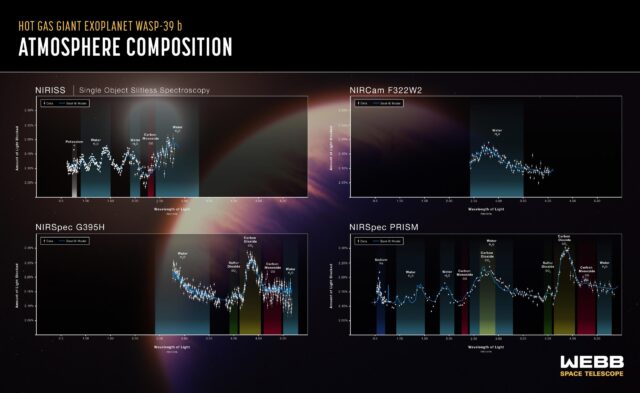 Data from the studies (three of which are published in Nature, and two that are still pending) also showed the presence of molecules like carbon monoxide and carbon dioxide, confirming a . There’s also sodium, potassium, and lots of water vapor. Again, the latter confirms some . Knowing all these details helps scientists hypothesize about the formation of WASP-39 b, including the possibility that it became so enormous by swallowing up smaller planets inside the WASP-39 system — that’s a likely conclusion based on the high ratio of sulfur to hydrogen. High oxygen content also suggests WASP-39 b formed farther away from its host star before migrating inward.

This is only a hint of what the James Webb Space Telescope can do. Its ability to characterize exoplanet atmospheres is shaping up to be more robust than astronomers had dared hope. When turned toward small, rocky planets like those in the TRAPPIST-1 system, Webb could make even more incredible discoveries.