PC sales had been on a decade-long decline, and then the COVID-19 pandemic happened. PC sales spiked in 2020 as the world adjusted to a new reality, and the numbers from 2021 show . Recent reports from , , and show double-digit growth last year, and analysts now believe the pumped-up PC market will last for at least a few more years regardless of what happens with COVID-19.

The primary driver of the PC’s resurgence is undoubtedly the pandemic. More people than ever are working and attending classes from home, and demand for PCs has kept up even as businesses and schools attempt to reopen.

There was concern among analysts that PC growth would fall off a cliff after a big rise in 2020, but all three reports point to big numbers. Canalys says PC shipments ballooned by 14.6 percent last year, and IDC is in the same ballpark with 14.8 percent. Gartner is more conservative than the others, reporting a 9.9 percent increase for 2021.

No matter who is right, any of these numbers would be good news for PC vendors. 2021 is shaping up to be the best year for PCs since 2013, which was early in the long, slow slide. In those days, people were buying more phones and tablets, and today consumers are more likely to keep the same phone for several years. At the same time, even a powerful tablet like the iPad isn’t flexible enough to get an entire day’s work done. 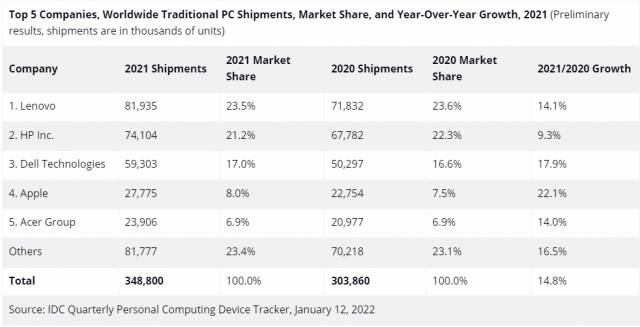 The pandemic also boosted Chromebook shipments — they’re often the cheapest way to get a capable laptop with a keyboard and trackpad. However, Gartner says Chromebook shipments have been falling, In fact, the fourth quarter of 2021 had weaker numbers across the board compared to the rest of the year (all three reports picked up on this). Chromebook demand may be the first to drop off as people begin shifting back to offices, a trend that will eventually hit other PCs too. It probably won’t be right away, though. Gartner predicts that it will take 2-3 years for PC demand to drop back to pre-pandemic levels.

The tapering at the end of 2021 may also be thanks to the ongoing chip shortage. There’s almost no excess inventory, which is good for the bottom line, but the industry is leaving money on the table. Analysts note that chip supply issues tamped down growth potential, and that could continue into 2022.