(Photo: Jian-Cheng Lai, Bao Research Group/Stanford University)
Chronic wounds are an under-acknowledged medical concern. At any given time, more than 600,000 Americans are thought to experience physiologically-stunted wounds that won’t heal. Chronic wounds aren’t just inconvenient and painful; they also rack up individual healthcare costs and prevent people from engaging in certain activities, resulting in a decreased quality of life.

Thanks to new research, this might not always be the case. A team of scientists at Stanford University has developed a wireless “smart bandage” that simultaneously monitors wound repair and helps to speed up healing. The bandage could shorten the time people suffer from chronic wounds while mitigating the physical damage and discomfort caused by conventional healing methods.

In a study last week in Nature Biotechnology, the scientists describe a flexible, closed-loop device that seals wounds while transmitting valuable biodata to an individual’s smartphone. Hydrogel makes up the bandage’s base: While conventional bandages tug and tear at the skin when they’re pulled away, hydrogel allows the smart bandage to attach securely without causing secondary damage during removal. On top of the hydrogel sits the electronic layer responsible for wound observation and healing. At just 100 microns thick, this layer contains a microcontroller unit (MCU), electrical stimulator, radio antenna, memory, and a series of biosensors. 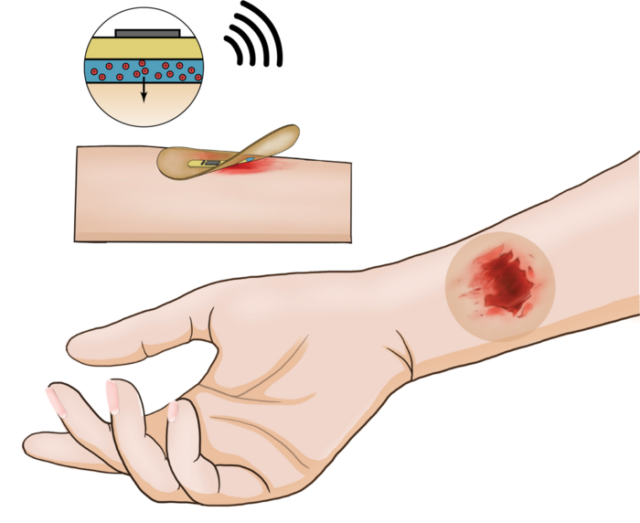 The biosensors look for two types of information: changes in electrical impedance and temperature fluctuations. Impedance is known to increase as wounds heal, while temperatures drop during wound resolution. Real-time insights regarding both of these indicators can inform the smart bandage’s repair-accelerating function, which utilizes electrical stimulation to encourage the activation of pro-regenerative genes. One of these genes, Apolipoprotein E, boosts muscle and soft tissue growth, while Selenoprotein P reduces inflammation while helping to clear out pathogens.

When tested on mice, the smart bandage’s stimulation indeed promoted the activation of both genes while increasing the number of white blood cells in each test subject. Mice that received treatment via smart bandage healed 25 percent faster than control mice. Treated mice also experienced a 50 percent enhancement in dermal remodeling, suggesting an improved quality of treatment and physical resolution.

As of now, the scientists’ smart bandage is just a prototype. The team hopes to scale the device’s size to fit humans while finding ways to reduce cost. There also might be a case for adding additional biosensors that track pH, metabolites, and other data. Still, the bandage presents a bit of hope for those who struggle to heal from persistent, life-disrupting wounds.