If you’ve been OK with the fact that Microsoft hasn’t pushed a recommendation to “upgrade” to Windows 11 to your PC yet, that will likely change soon. Microsoft has finally declared it ready for “broad deployment” almost seven months after it launched in October of 2021. This means it’ll begin pushing upgrade notices to people who haven’t yet received them. Upgrading is free, of course, should you choose to go along with it. You will need to be running Windows 10 version 2004 to upgrade.

The change in the operating system’s status was posted recently to the . This is seemingly the culmination of Microsoft’s “phrased rollout” of Windows 11.

It began by offering it only on new PCs, and on “eligible” Windows 10 computers. Those eligibility were a stickler for a lot of folks though. Not only does it require a semi-recent CPU from or , it also requires a Trusted Platform Module 2.0 (TPM). Windows 11 uses the TPM module for security features like Windows Hello and Bitlocker drive encryption. You also need a motherboard that offers a UEFI BIOS. Generally speaking, if your PC was more than five years old, you weren’t/aren’t getting Windows 11. Some people who built systems 3-4 years ago may also be impacted depending on what they built. 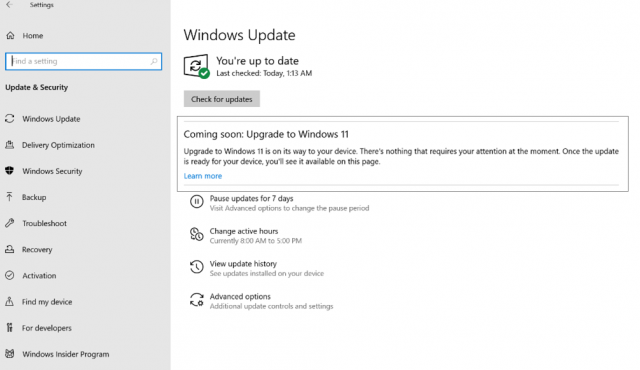 For some people, that will probably be just fine. Although Windows 10 was mostly praised — — Windows 11 has met a lukewarm reception. This follows the pattern of Microsoft alternating between “good” and “meh” releases that started in the 1990s. The list of good-then-meh OSes includes: Windows 98 –> Windows Me, Windows XP –> Windows Vista, Windows 7 –> Windows 8, and Windows 10 –> Windows 11. You can see the pattern here. Anyway, Microsoft has described Windows 11 as a “modern, fresh and beautiful experience” but not everyone feels that way. It certainly looks fresh, but not all the changes Microsoft made have sat well with people.

The tweaks the company made to the and have been discussed ad nauseam, so we won’t rehash them here. Suffice to say Microsoft has removed a lot of customization and features that were previously available in its operating systems. Some of these functions may be coming back. The company has already discussed adding to Explorer, ,and has even made it easier to . That last change was only made after Microsoft initially made it very difficult to do, resulting in an online backlash. Still, Microsoft seems to be listening to (some) feedback it’s getting.

If you decide to upgrade, you need to pay attention during the honeymoon period. If you don’t like the “fresh and beautiful” experience, you have a 10-day period during which you can roll your system back to Windows 10. Personally, I upgraded last year and haven’t noticed any noteworthy improvements over Windows 10. All I did was lose some functionality, like being able to drag icons onto the taskbar. I also miss being able to right-click the taskbar to get to the Task Manager, but it’s only a right-click away on the Start button. I have more small gripes, but you get the picture. Of course, there’s always Thread Director, which should benefit people with Alder Lake CPUs. However, you’ll need to do your own testing as it’s unclear how much it actually offers.