(Photo: Nekton Mission)
We’ve long thought Antarctica to be relatively free from human influence, thanks to its extreme climate, general lack of human presence, and distance from inhabited land. Unfortunately, what was once considered the last “pristine” wilderness might no longer be. An Antarctic research expedition has found microplastics in the continent’s water, air, and sediment, suggesting a level of pollution far higher than expected.

Nekton, a nonprofit ocean research initiative, partnered with forensic scientists at the University of Oxford to study microplastic pollution in the Weddell Sea—one of the Antarctic’s most remote regions. During an expedition in 2019, scientists gathered samples of the Weddell Sea’s air, subsurface seawater, sea ice, and benthic (underwater) sediment.

The team used a polarized light microscope to examine each of the 82 samples for microplastics.

Every single sample contained some form of microplastic pollution. Polyester fibers, which are most often used in the production of synthetic textiles, were by far the most ubiquitous with a presence in 60 percent of samples. Most other pollutants were determined to be nylon, polypropylene, and acrylic fragments of varying shapes and colors. Although the team believes some of these originate from nearby research vessels or from fishing gear used by fleets in the neighboring Scotia Sea, most microplastics appear to arrive by unexpected means: the wind. 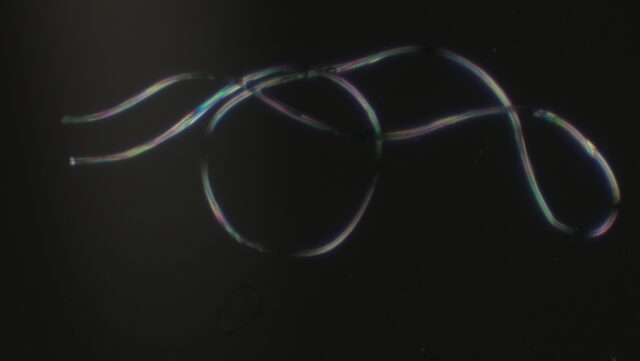 Polarized light microscopy image of a polyester textile fiber from one of the team’s samples. (Photo: Nekton Mission)

One might expect seawater to contain the highest microplastic diversity, but a wider spread of microplastic categories was found in the team’s Weddell Sea air samples than anywhere else. Most microplastics appear to float in from South America. Once they arrive in the Antarctic, they’re typically there for good; as a result, the Weddell Sea acts as a sink for plastic particles from a whole other continent.

The expedition’s forensic results challenge the longstanding assumption that the Antarctic Circumpolar Current (ACC), a deep, eastward-flowing current with an associated polar front, isolates most of Antarctica from pollution affecting the rest of the ocean. Some scientists have theorized that the ACC would protect the Weddell Sea and other regions from the increasingly dire issue of microplastic pollution, but it’s now clear this isn’t the case. Worse, the expedition’s findings appear to suggest that microplastics that cross the ACC can get “stuck” there, creating the potential for buildup over time.

The news of Antarctica’s surprising plastic pollution levels couldn’t have come at a more impactful time. This week, more than 150 nations’ environmental representatives are in Uruguay to form an international, legally binding text on plastic pollution. The text will help coordinate a global response to microplastics’ rapidly-increasing presence in food, water, and (as this study has shown) even the air we breathe.

“The results shown here from a remote, arguably near-pristine system, further highlight the need for a global response to the plastic pollution crisis” to conserve marine systems, the researchers for Frontiers in Marine Science