The James Webb Space Telescope was not designed exclusively to hunt for exoplanets like NASA’s Transiting Exoplanet Survey Satellite (TESS), but it can still make vital contributions to our understanding of these distant worlds. NASA has announced that Webb just confirmed its first exoplanet, a world known as LHS 475 b that was previously identified as a potential exoplanet by TESS. Unlike many of the worlds outside our solar system, this one is about the same size as Earth.

TESS, which has been operating since 2018, scans large swaths of the sky in search of nearby stars that show evidence of exoplanets.

It looks for small drops in light that indicate an exoplanet has passed in front of its star from our perspective. However, TESS is not equipped to observe individual stars to confirm the existence of those planets. Astronomers have to follow up with another instrument to ensure they’re seeing real planets and not some other anomaly. In this case, the Johns Hopkins University Applied Physics Laboratory decided to use Webb’s Near-Infrared Spectrograph (NIRSpec) to check LHS 475 b.

The team reports that it took just two transits for Webb to confirm the exoplanet does, in fact, exist. That’s not very long in absolute terms, either. LHS 475 b completes an orbit of its star in just two Earth days. “There is no question that the planet is there. Webb’s pristine data validate it,” said Jacob Lustig-Yaeger from Johns Hopkins. The transit method of exoplanet detection (also known as transit photometry) is best at spotting larger planets that block a lot of light, but . 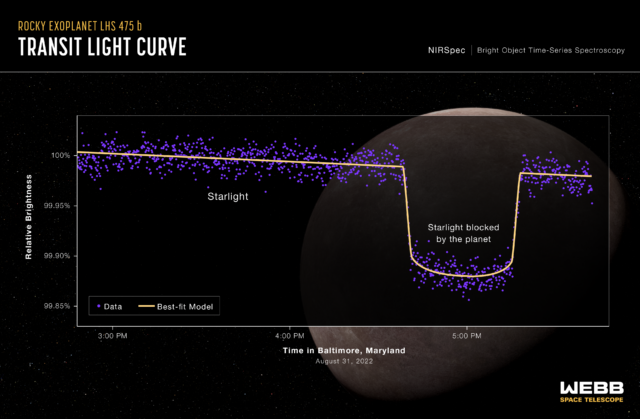 Webb is an excellent tool for confirming exoplanets because it’s powerful enough to . However, the transmission spectrum gathered by Webb doesn’t show anything for LHS 475 b. So, we can probably say that this exoplanet does not have an Earth-like atmosphere or a heavy methane atmosphere like Saturn’s moon Titan. There are still some atmospheric types that could still exist, though. A total or near total carbon dioxide atmosphere like Mars or Venus is still in the cards — carbon dioxide atmospheres are so compact they can be challenging to detect even for Webb.

More observations are needed, but it’s possible LHS 475 b is a completely barren rock. It orbits a smaller, cooler red dwarf star, but it’s closer to the star than any planet in our solar system is to the sun. If it does have a carbon dioxide atmosphere, it’s probably more like Venus. LHS 475 b is relatively close in the grand scheme, just 41 light-years away in the constellation Octans. While Webb is the most powerful telescope at our disposal, other observatories should be able to lend a hand.