The US Geological Survey (USGS) issued a red alert late Sunday night at the first sign of activity. Mauna Loa’s impact was confined to its summit at the time, precluding any immediate evacuations nearby. On Monday morning, lava was still overflowing from the volcano’s caldera. Though authorities weren’t immediately concerned for any downhill communities, they did express that ash from the eruption could float to and accumulate in nearby areas, presenting possible health and infrastructure concerns.

The USGS and the Hawaii County Civil Defense Agency first became wary of Mauna Loa’s impending eruption in September, when seismic activity near the volcano began to . The USGS shared that Mauna Loa was “in a state of heightened unrest” but assured the public that there were “no signs of an imminent eruption” at the time. Authorities prohibited backcountry hiking at Mauna Loa nonetheless. Just a month later, 36 small earthquakes occurred near the volcano’s base in just two days, extending Mauna Loa’s “heightened unrest” status. 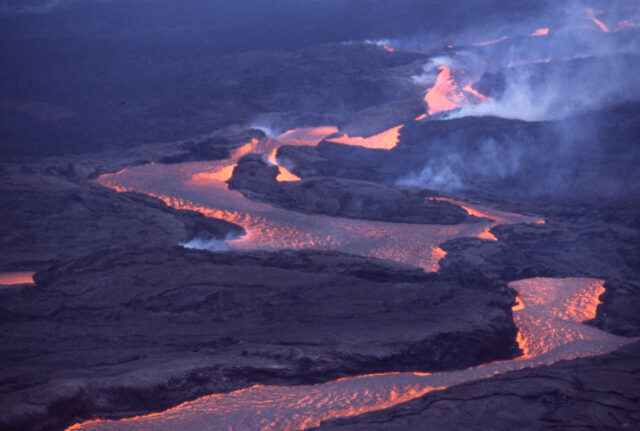 Mauna Loa—which is located just southwest of the Big Island’s center—last in 1984. The eruption itself lasted 22 days, with lava flow stopping just four miles away from the nearby city of Kilo. For the first time, scientists were able to thoroughly monitor Mauna Loa’s lava flow, generating what are now undoubtedly priceless insights regarding this year’s eruption and its possible effects. Before 1984, Mauna Loa was estimated to have erupted approximately every six years; the 38-year gap between then and this year’s eruption bookends the volcano’s longest known period of quiescence.

This time around, the public has multiple tools at its disposal through which to monitor Mauna Loa’s activity. Not only is the USGS delivering real-time updates through its and its Mauna Loa , but people from around the world can view the eruption through the USGS , which sits on the volcano’s northwest rim.