(Photo: Angela Moscaritolo/PCMag)
Apple has always relied on some of its biggest competitors for components of its mobile devices. The most notable is Samsung, which it’s relied on for the OLED displays in iPhone. At the same time, Samsung is its biggest adversary in the same market. This must have been sticking in Apple’s craw because according to a new from Bloomberg, Apple is going to alter this arrangement by making its own displays. This won’t be happening any time soon, but it’ll be a major blow to Samsung, LG, and others. Apple’s also looking at building its own wireless chips as well, which would be bad news for Broadcom and Qualcomm.
Overall, it signals a broader move by Cupertino to produce more of its own components and cut out third parties, the way it did with Intel.

Apple currently uses Samsung and LG displays for the iPhone, iPad, and Apple Watch. However, starting in 2024 or thereabouts, it’ll be switching to in-house designs, according to the report. Apple also sources displays from Japan Display, BOE Technology, and Sharp, to 9to5mac. However, LG and Samsung will bear the brunt of Apple’s decision as it’s focusing on its mobile products first. The first product to get an Apple display will be the “highest-end Apple Watches” in late 2024. All Apple Watches currently use OLED panels presumably made by LG, which also makes displays for the iPhone 14 Pro and Pro Max. 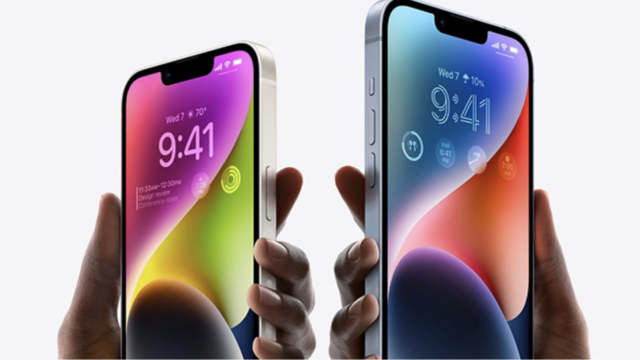 Samsung is reportedly responsible for over 80 percent of the displays used for the iPhone 14 lineup. (Image: Apple)

When Apple makes the switch, it’ll reportedly move from OLED to mini-LED as well. This technology is supposedly easier to see at an angle, making it perfect for a watch and a phone. It also offers more vibrant colors, and images look like they’re painted onto the surface, according to Bloomberg’s sources. This move has apparently been in the works for many years. Apple originally began looking into mini-LED in 2018 with the goal of offering it by 2020. The project was delayed due to costs and technical challenges, some of which could still push its arrival into 2025 or so. Bloomberg also says Apple has “devised their manufacturing process” entirely in-house.

Around this same timeframe of late 2024, Apple is also reportedly working on an all-new chip for iPhone that will handle cellular, Wi-Fi, and Bluetooth. That is also to Bloomberg, notably from Mark Gurman. This move would shut out both Broadcom and Qualcomm from Apple’s business. Broadcom currently makes the Wi-Fi/Bluetooth chip, and Qualcomm makes the modem. Apple will reportedly introduce its own modem first, in 2025, then move to an all-in-one design after that. It reportedly wanted to introduce its own modem as soon as 2022, but that obviously didn’t happen.

These moves are consistent with Apple’s strategy to stop relying on partners for components to boost not only its profits, but performance as well. It remains to be seen what its three-in-one mobile chip will do compared with those from Broadcom and Qualcomm. But nobody can argue with the results of Apple dumping Intel for its own M-class silicon in 2020. The M1 and M2 families of SoCs have been a resounding success, likely prompting Apple to move more of its silicon design in-house. The next question is whether Apple will be manufacturing these chips itself or using a fab like TSMC as it does currently.