In partnership with robotics company Virtual Incision, engineers at the University of Nebraska-Lincoln have devised a narrow robot that helps medical professionals conduct surgical procedures from afar. MIRA, short for “miniaturized in vivo robotic assistant,” can be controlled remotely and even perform surgery autonomously. And thanks to a $100,000 grant from NASA, it could be proving its chops in space in as little as two years.

At first glance, the two-pound robot almost looks like a small kitchen gadget. Its base rod has a few basic switches and eventually gives way to a claw-like apparatus, which performs the actual surgery. Between each arm of the claw exists a camera, which helps to guide the robot throughout the procedure. But no one will be manning the camera when MIRA’s aboard the ISS. Instead, MIRA will work autonomously to complete simulation exercises, such as cutting taut rubber bands or pushing metal rings along a wire, which the University of Nebraska-Lincoln says imitates surgical activity. 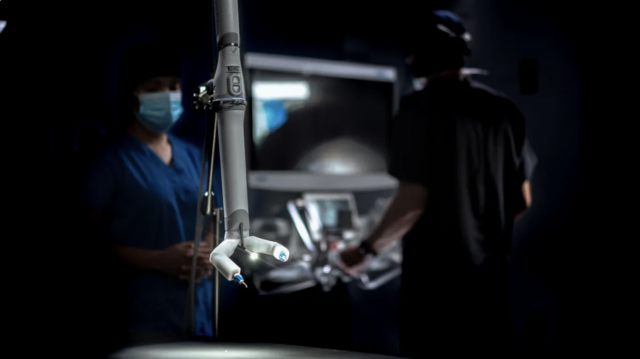 MIRA has been tested from a 900-mile distance and has even performed minimally invasive colon resections here on Earth. Though the point of MIRA’s stay on the ISS isn’t to provide actual medical care to astronauts…yet. The robot’s engineers first want to see how MIRA manages the harsh movements associated with launch, then measure its simulative precision in zero gravity.

If all goes well, medical professionals both aboard the ISS and on Earth could end up using MIRA to provide care to astronauts who’d otherwise face more invasive procedures or be forced to go without. Virtual Incision estimates it’ll be another 50 to 100 years until MIRA performs fully autonomous surgery in space.

MIRA is NASA’s second recent attempt at bringing futuristic healthcare onto the ISS. Earlier this year, the agency “” flight surgeon Dr. Josef Schmid into astronauts’ view by transmitting a live 3D model of Schmid onto the station. At some point, NASA hopes to combine holoportation technology with augmented reality to conduct in-space medical training and other types of telementoring.

“As people go further and deeper into space, they might need to do surgery someday,” said Shane Farritor, engineering professor and Virtual Incision co-founder, in a university . “We’re working toward that goal.”