What you see is what you get with the 2020 Jeep Gladiator: It has the soul of a Jeep Wrangler SUV, which means it goes off-road. It has a pickup bed, which means it goes to and from Home Depot. And it has four doors and two rows of seats which (along with the pickup bed) means it’s more than 18 feet long, so even if the Gladiator goes everywhere, you can’t park it just anywhere.

The Gladiator rides alright, tows up to 7,500 pounds, and has a decent drivetrain. But highway handling is not great, wind noise is noticeable, and you have step up almost two feet to get in.

The cheapest Gladiator is $35,0o0, and the Gladiator Rubicon meant for serious off-roading tops $62,000. But if you can choose to get one, you’ll have fun. 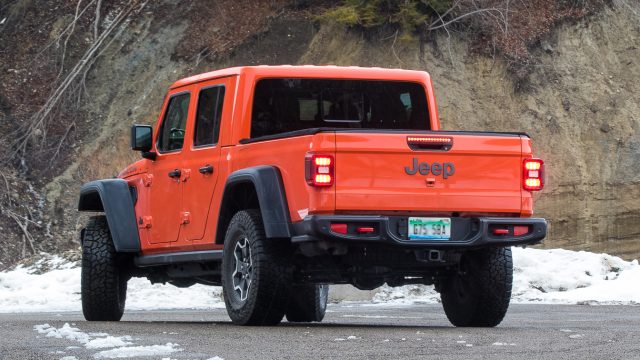 Jeep dates to World War II and the first General Purpose (GP, pronounced geepee and eventually jeep) light 4×4 utility, the first civilian Jeep (CJ) in 1945, and pickups produced 1947-1992. There was a 10-year gap until the first new Jeep pickup truck concept vehicle was shown briefly in 2003, with adaptations teased and reteased for 15 more years until the Gladiator pickup finally arrived last year, a gap of nearly 30 years. Too long.

Compared to the four-door Wrangler it is based on, the Gladiator is 30 inches longer overall, 218 inches vs. 188 inches, with a wheelbase 19 inches longer for a truly comfortable legroom in the rear seat. The Gladiator also tows more and costs more, but just $2,000 more comparing entry model to entry model. Both have easily-owner-removable doors and tops, which makes both fun crawling over boulders or sand dunes in good weather, and louder and sometimes harsh in day-to-day highway driving. No surprise there. Still, 75 mph on the highway in the Gladiator feels better than 55 mph did in a Jeep a generation ago. 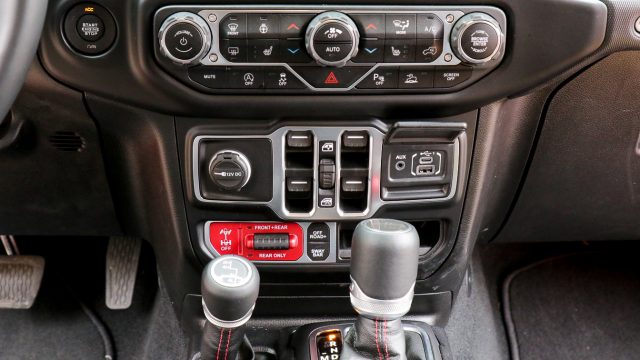 Center stack bristles with buttons and knobs. Lever on left controls four-wheel-drive. If you can’t find the electric window controls on the door, they’re here, in the very middle of the picture.

Jeep Gladiator On- and Off-Road

I test-drove the nearly top-of-the line Jeep Gladiator Rubicon 4X4, $62,020 including a healthy $1,495 freight fee from the Toledo, Ohio, factory. The Rubicon is the most serious off-roader in the line. To get in, you have to step up almost two feet. Don’t even think about wearing a skirt. (Damn. And here I am, stuck with this new leather mini – Ed)  The front windshield is essentially a flat piece of glass. The doors are rudimentary. The center console and stack bristle with controls for the four-wheel-drive system but if it’s initially confusing, just press the starter, pull back on the main shift lever, and off you go.

Around town the Gladiator drives reasonably well and you feel as if you’re sitting up high. (You are since it’s 75 inches high.) On the highway, the road and wind noise builds from the lack of sound insulation and the big, knobby 33-inch (diameter) tires on the Rubicon. The steering feels imprecise at speed, meaning you sometimes make repeated small adjustments to keep it centered in the lane. The bucket seats are pretty flat, and some adjustments are manual. The front left wheel well is so big, there’s no room for a driver footrest. On bad road surfaces, you feel the bumps, although there’s less pitching than on the Wrangler with its shorter wheelbase. The Gladiator uses the sophisticated coil spring suspension of the Ram 1500 pickup and that helps. Another nice touch is the damped tailgate that comes down smoothly, rather than banging open.

Off-ready tires on the Gladiator Rubicon.

Once you’re off paved roads, the Gladiator is in its elements. The Rubicon has 11 inches of ground clearance and fords 30-inch streams with the doors on. It has a 43-degree slope approach angle. The front breakover angle, the measure of how steep an angle you can approach without scraping anything, is 20 degrees. The rear departure angle is 26 degrees. Both are less than the Wrangler because of the longer Gladiator wheelbase and the pickup bed.

There’s nothing else like this among midsize pickups in terms of off-roading.  The Gladiator Rubicon employs a two-speed power transfer (between front and rear wheels), locking front and rear differential to improve traction, a disconnecting front sway bar (it raises off-road clearance), Dana 44 front and rear axles, and a 77.2:1 crawl ratio for low-speed travel. An Off-Road+ mode that modulates stablity control, throttle, and gear selection. In 4WD High, it’s dialed in for romping in sand; in 4WD Low, for traversing rocks and small logs.

All this from a 3.6-liter, 285-hp V6 engine and eight-speed automatic that gets to 60 mph in about 7.5 seconds. A V6 diesel is coming, expected this calendar year; it’s down 26 hp versus the V6 but the 442 pound of torque tops the gas V6 by 70 percent. The EPA rates the gasoline Gladiator at 17 mpg city, 22 mpg highway, 19 mpg combined on regular fuel. The six-speed manual also offered is rating at 16/23/19. Expect the diesel to boost mpg by 2-3 mpg or about 10 percent. A Rubicon weighs a bit more than 5,000 pounds, about 500 pounds more than the competing Toyota Tacoma TRD Pro or Ford Ranger Lariat SuperCrew 4×4, 300lbs more than the Chevrolet Silverado ZR2.

There are five Jeep Gladiator model variants, or trim lines. Altogether, there are enough options to make the top of the line loaded Gladiator approach twice the base price of the entry model.

Gladiator Sport, $35,040, including $1,495 freight. Four-wheel drive is standard, as is a six-speed manual, and reasonable 17-inch steel wheels with 245/75R17 all-season tires with all-terrain tires optional. Seating fabric is cloth. The UConnect 3 infotainment screen is a modest 5 inches diagonal, with eight speakers, and there is a remote USB port, but a bigger LCD is not an option, nor is Apple CarPlay or HD Radio. The instrument panel multi-information is a 3.5-inch monochrome LCD. Towing capacity with the better of two options packages is 7,650 pounds. A Torx toolkit is included to remove the doors in just a few minutes.  Skid plates, tow hooks, and a soft top are standard.

Upper trim lines include an AC jack, and it’s not an extra-charge option.

Gladiator Overland, $41,890.  It steps up to a 7-inch center stack display, UConnect 4, Apple CarPlay and Android Auto, and seven USB jacks. There are side steps, a 7-inch color multi-information display, 115-volt outlet, and garage opener. During 2019 production, this was the top end Gladiator focusing on comfort and smoother driving while still being able to match or beat most any all-wheel-drive vehicle off-road.

Gladiator Rubicon, $45,370. In addition to the serious off-roading features, it steps back down to 17-inch alloy wheels and offers optional driver assist features. Its top speed is governor-limited to 97 mph vs. 110 mph for other models.

Gladiator Mohave, price TBA. Sold as a limited editon, it’s intended for higher speeds, up to 50 mph, in the low driving range. Most typically you’d be running sand dunes rather than creeping over rocks. It rides an inch higher than Rubicon and uses a different set of Fox shocks. The frame and suspension parts are even heavier duty to deal with a vehicle that might (correction: will, if you play hard) go airborne from time to time and land hard. The Max Tow towing package comes standard to get the more powerful cooling package. Pricing will be in line with the Rubicon-North Edition models, Jeep suggests. 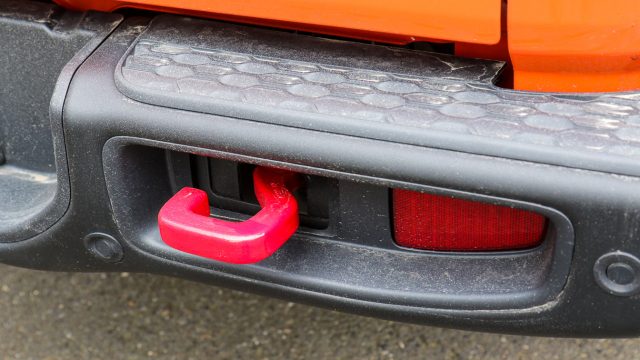 The Gladiator comes with three or four serious tow hooks. The Gladiator Rubicon bumper is steel, allowing a winch to be added.

Driver assists are options rather than standard. The Active Safety Group, $895, comprises blind spot detection, rear cross-traffic alert, and rear parking sensors. The Adaptive Cruise Control / Forward Collision Warning Package, $795, is what the name says. ACC goes down to 0 mph but will return to speed; it holds the car stopped for 3 seconds then disengages.  Lane departure warning / lane keep assist are not offered, nor is pedestrian detection.

There are two front airbags and two side airbags, but no side air curtains. 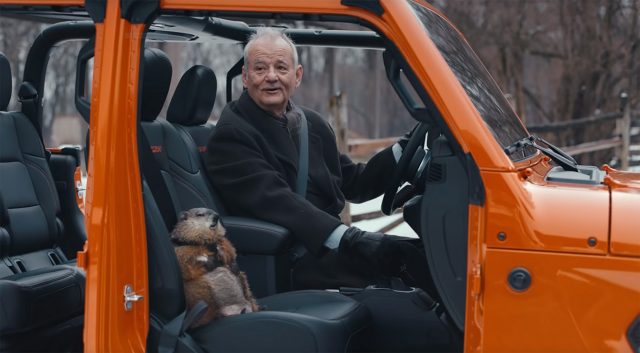 Gladiator Vs. the Competition

The 2020 Jeep Gladiator competes with several midsize trucks, most of which have an off-road version. They are, in order of end-of-2019 sales: Toyota Tacoma, Chevrolet Colorado, Ford Ranger, Nissan Frontier, Jeep Gladiator, Honda Ridgeline, and GMC Canyon. The Gladiator sold 40,000 units in 2019, its first year, but didn’t reach full output and sales until the second half when it sold 33,000 units, the peak month being a bit over 6,000 in October. Sales may pick up in the wake of the the Super Bowl: The featuring the Gladiator was seen as the best ad of the game. In its first year, the Gladiator named a bunch of truck of the year awards including North American Truck of the Year from NACTOY.

If you just want to take a 4×4 pickup onto a dirt or gravel road with ruts and the occasional rock sticking up a bit, they’ll all get the job done. Others will be better at highway driving, smoother, and quieter. What the Gladiator offers is the Jeep aura, off-road abilities that go from good to great. For now you’ve got a very long vehicle with a roomy cockpit (front and back), and a shortish pickup bed. Jeep suggests other Gladiator size configurations will come.

This is definitely a car you want your partner or spouse to understand and appreciate before you sign the papers. See if you can test-drive it a couple miles on an interstate, not just local rounds. The Gladiator is no Jeep Grand Cherokee (upscale two-row SUV) if you want a smooth ride, quiet cockpit, and soft leather upholstery. And the Gladiator is one step ahead of the Grand Cherokee in going way-off-road, which Grand Cherokee in turn is one step ahead of most all other all-wheel-drive cars. Jeep understands unpaved roads and obstacles.

For serious off-roading, or if this is not your only car, the Gladiator Rubicon is the best choice. You’ll easily pay in the mid- to high-fifties on list price once you check the options you want, perhaps top $60,000.  A more cost-effective Gladiator is the Sport S with automatic transmission, hardtop and insulating liner, the two driver assist / safety packages, the 7-inch (LCD) radio group with CarPlay and Android Auto, the less costly trailer tow package, and a convenience group package required by one of the other options. That’s $43,165 before the incentives, so you might well wind up paying under $40K (see below).

(If you want the nicest all-round midsize pickup, that’s the Honda Ridgeline, the most car-like pickup. The Toyota Tacoma is another good choice. Toyota, Ford, Chevy and GMC make off-roading versions of their pickups.)

If you’ve shopped for a Jeep Gladiator over the past several months, you may know Jeep dealers were marking up the Gladiator, especially the Rubicon, by as much as $10,000, sometimes $20,000 (asking, if not getting) at mid-year when the Gladiator starting arriving in quantity. By year’s end, the markups were gone. Now, it’s Jeep that’s giving back money: a $2,000 incentive for virtually all buyers, $5,000 at many dealerships, and, says , as much as $9,000 in a few cases. Some incentives excluded the Rubicon.

The bottom line on the Jeep Gladiator is that it’s a little rough as a highway cruiser and many contractors / tradesmen want a bigger bed for hauling stuff, but it’s great off-roading, and it has character in droves.