(Photo: Microsoft)
We’ve all been there: you’re at your computer, and you need to search for something right now. You don’t want to use the web browser that’s already open right in front of you though. No, you need search on the desktop. Good news: Microsoft is currently testing this out in a Windows 11 preview build. All snark aside, the big news here isn’t so much the search box, but the fact that Microsoft is toying with desktop widgets once again.

The new search box appears in Windows 11 Insider Preview and it allows you to search the web directly from the desktop.

Microsoft doesn’t specify which search engine it uses, but we all know the answer to that question; it’s own. It also doesn’t say where the results will appear, but like searching via the Start menu we can assume it’s in the Edge browser. This would likely occur even if Edge isn’t your default browser. After all, late last year Microsoft to prevent certain links from opening in non-Edge browsers. Microsoft says if you’re using this preview build and don’t like the search box, you can easily remove it. Just right-click the desktop to click “show more options,” then toggle “show search.” Also, not all Insiders will see this feature in the build as it’s only being pushed to some users according to Microsoft. 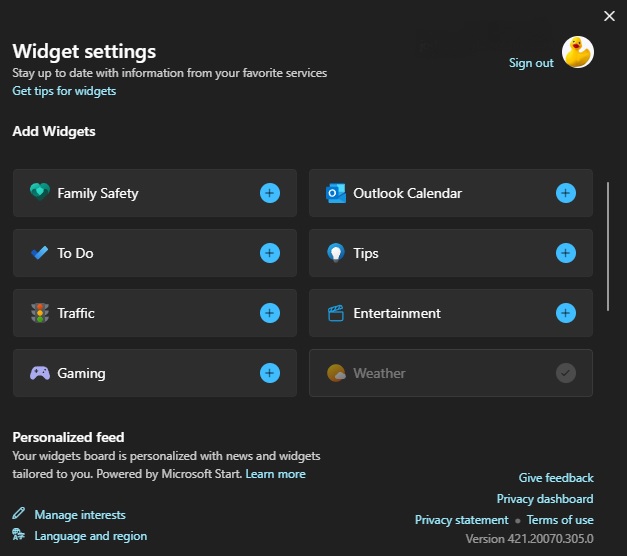 Widget options in Windows 11 are lacking, to say the least.

Microsoft says the search box is the company experimenting with “lightweight interactive content on the Windows desktop.” This could be a harbinger of more add-ons for the desktop, which would please quite a few people we would wager. Widgets were a popular feature of Windows 10, but in Windows 11 they’re anchored to the left-side of the screen. They also are all contained within a block that pops out when you click a taskbar icon, and it disappears when you click anything else. There’s customization options (above), but they’re quite limited. Suffice to say, it’s a downgrade over the Windows 10 version.

Though we were never fans of having a ton of widgets on our desktop, displays have gotten a lot bigger in the past few years. We now have room for a little calendar, a clock, and maybe even a little weather box. Heck, we might even be tempted to put a calculator on our desktop. Or at the very least, we’d like to have the option to pin some things to our desktop, off to the side. Sticky notes are nice, but there’s room for a few more. All this raises the question: how many widgets does it take to kick a person out of the “power user” club?